Cara Delevingne Has Sparked A War-of-words With Game Of Thrones Star Richard Madden After The Actor Branded Her "Unprofessional" Over A Controversial Interview. 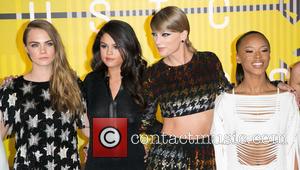 The model-turned-actress came under fire over the summer (15) after she appeared bored and tired during an appearance on U.S. TV show Good Day Sacramento to promote her movie Paper Towns.

Fellow Brit Madden, who played Robb Stark in the hit TV show and Prince Charming in Cinderella, called her "unprofessional" for failing to put on a happy face for the cameras, adding, "It made her seem ungrateful... For (movie) Cinderella, I did six weeks of those interviews, where you get asked the same eight questions. If you're not capable of doing it gracefully, then don't do it."

Delevingne has now taken aim at Madden over his comments, writing in a series of messages on Twitter.com, "Richard Madden I have no idea who you are but I think it's little desperate for a grown man to be bad mouthing someone they don't know... If you really want attention that badly, try focusing on your own work and not other people's."