An intoxicated Michelle Rodriguez was taking part in silly antics with British model Cara Delevingne at courtside at the New York Knicks game. 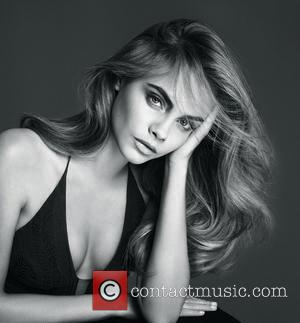 Michelle Rodriguez is now added to the long list of celebrity friends that British model Cara Delevinge has.

The pair enjoyed courtside seats at the New York Knicks game on Tuesday (Jan 7th) as they faced off against the Detroit Pistons.

But it is unclear how much of the game they actually watched due to their silly antics and constant fooling around which also drew the fans attention.

The 'Fast & Furious' actress, who was obviously drunk, was caught by a photographer in the fourth quarter cuddling up to the Victoria's Secret model, posing for selfies, smoking e-cigarettes and drinking.

They were even caught taking part in a sloppy kissing session.

Only a few of the silly photos were uploaded to Delevingne's Instagram account, one was just of Rodriguez wearing a black hat on top of a Knicks cap.

"And tonight the Knicks @mitchymich x", the caption read.

The other was a snap of the court with a circle of smoke in the center, which Cara blew from her e-cigarette.

The 21 year-old "had to take Michelle's drink away from her during the second half of the game," an eye-witness told Us Weekly. "Michelle was so sloppy, it was embarrassing to watch."

TMZ caught the two female celebrities leaving the venue and Rodriguez was still up for messing around as she attempted to do a couple of crazy kicks towards the paparazzi, Delevingne on the other hand tried to take no notice of the attention and let her drunken friend entertain the onlookers.

It is not clear how the two came to be pals but Michelle has stated in the past, while she isn't gay she is attracted to either gender.

"I've gone both ways. I do as I please. I am too ... curious to sit here and not try when I can," she told Entertainment Weekly in October. "Men are intriguing. So are chicks."