Rita Ora has revealed that her ''wifey'' Cara Delevingne is behind her recent love of saucy latex outfits and she also plans to write songs about her failed romance with Rob Kardashian. 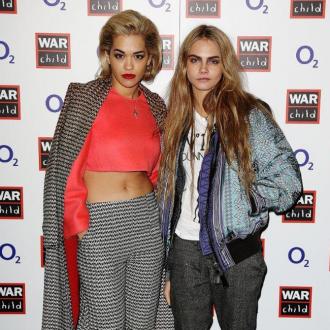 The 'Radioactive' singer revealed her model best friend - who she has previously described as her ''wifey'' - has been encouraging her to wear lots of racy rubber outfits on stage.

Speaking in the latest issue of Hunger magazine, she said: ''When it comes to my look, my music and the videos, I have 100 per cent control over it. If I make mistakes, have a little slip, I blame myself.

''But the Lycra clothes and the latex that you've seen me in this season, Cara Delevingne and I discussed and brought them into reality.''

The 22-year-old R&B star also turned to it-girl Cara, 20, for support following her split from Rob Kardashian last year, and she is now planning to follow in the footsteps of Taylor Swift by writing about her ill-fated relationship for her next album.

The 'R.I.P.' hitmaker - who was publicly accused of sleeping with ''more than 20 dudes'' in a Twitter tirade by the reality star in December 2012 - said: ''My next album is about me being 22, growing up in this industry really fast, and being in a really s****y relationship and all the s**t I had to deal with.''