Cardi B and Beyonce's 2017 collaboration 'scrapped' after leak

Beyonce and Cardi B scrapped a secret collaboration in 2017, after it leaked online. 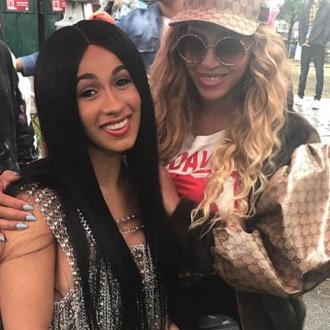 Cardi B and Beyonce were set to release a collaboration in 2017 - before it was leaked.

In October of that year, engineer Michael Ashby, posted a picture of his computer screen on his Instagram Story and the file name 'Cardi B ft Beyonce demo' clearly on display.

He was then forced to apologise for the leak, but Cardi denied she had ever met him and that the song even existed.

However, a snippet of the song, believed to be called 'Wet', was leaked online.

Producer J White Did It - who co-produced Cardi's breakthrough hit 'Bodak Yellow' - has since claimed the track was definitely made, but that the pair decided to scrap it after the leak.

In a new video interview posted on social media, J - who has since teamed up with Beyonce and Megan Thee Stallion on their 'Savage' remix - explained: ''I was just as giddy as everybody else.

''I was sitting there just waiting, looking on the internet then it leaked.

''Bro, three years ago I had a Beyoncé play with Cardi and that kinda went sour because it went viral that they was doing a song together and that cut out

Cardi and Beyonce first met when the 'Press' rapper performed at her husband Jay-Z's Made In America festival in August 2017.

And the pair's fans demanded the 'I Like It' hitmaker and 'Crazy in Love' singer team up on a track after a picture of them at the event went viral.

Cardi B congratulates lesser-known artists ahead of Grammy Awards

Cardi B suffers nightmares about her school days

Cardi B - Up Video Video