Cardi B didn't feel welcome in the music industry when she first started out and says Offset was the first person to support her. 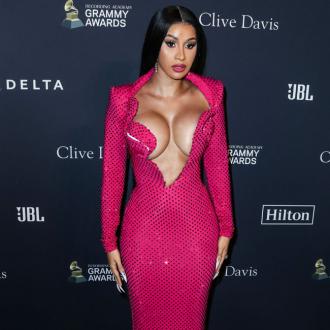 Cardi B didn't feel welcome in the music industry when she first started out.

The 27-year-old rapper admitted her ''feelings got hurt'' because people didn't take her seriously as an artist and she says her now-husband Offset, was the first person to support her, when he worked with her on 'Lick' in 2017 and invited her to feature on Migos' track 'MotorSport' the same year.

Speaking to Zane Lowe on New Music Daily on Apple Music, Cardi said: ''When I first started doing music and everything, my feelings got hurt. A lot of times, because I felt people just kept denying me in my face. Cause my manager at the time, they said, cause you have to be more friendly. You got to go out more. And even when I was being friendly to other artists, and I'm not talking about female artists, just being more mixy in the industry, I just felt I'm shaking hands with everybody, but nobody want to do a f****** feature with me. What the hell?

''And then my husband, he was the one that gave me a feature. And, I still didn't blow up as crazy as, as I thought I was going to blow up. But like I said, once you get up there oh people are going to be on it and you cannot just take it personal.''

And Cardi - who has had a long-running feud with Nicki Minaj - insisted it's not true that female rappers can't get on with each other.

She said: ''I feel like people be wanting to put female artists against each other. It's the people that be trying to do that s***. You know what I'm saying? Every single time I feel like there's a female artist that's coming up, coming up, coming up and it's getting their mainstream moment, I always see like little slick comments like, 'Oh, they taking over your spot. They taking over this. They taking over that'. And it just makes me feel like, damn, why it had to be like that? Because I actually like shorty music a lot. Why does it even have to be like that? Why it has to be somebody's taking my spot, somebody is taking my this.