Cardi B: My struggles motivate me

American rap star Cardi B has claimed that Cardi B says her struggles have proved to be a source of motivation. 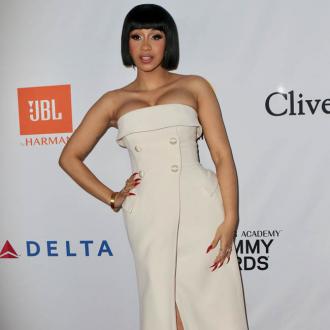 Cardi B says her struggles have proved to be a source of motivation.

The chart-topping rap star worked as a stripper prior to her emergence as an international music act, and Cardi has claimed that the troubles she encountered en route to the top of the entertainment industry have made her more appreciative of her success.

Writing on her Twitter account, Cardi explained: "You gotta struggle before you come up, it teaches you a place you never want to return to. (sic)"

This comes shortly after Cardi revealed she wants to release her own fashion line.

The 'Bodak Yellow' hitmaker has a lot of career ambitions she'd like to accomplish, but she's most looking forward to having a family who she can pass her business empire onto in the future.

Asked by Zendaya what else she'd like to achieve, she shared: "I really want to accomplish more records, more Billboard hits. I might want to get into acting or designing clothes, but my real goal is to have beautiful kids, a beautiful mansion, and do business that makes me money until the day I die. Then be able pass it on to my children."

The chart-topping star also revealed that her dream day off would involve wearing her most comfortable clothing and not having to worry about her appearance.

She said: "I like to do absolutely nothing. I don't want nobody to invite me nowhere.