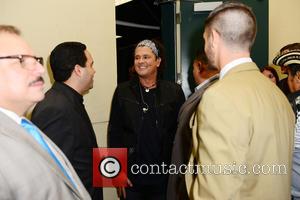 The crooner was back home in Colombia over the weekend (ends10May15) to film the promo, and he took to social media to post behind-the-scenes photos.

On Sunday (17May15), Vives was joined by the reigning Miss Universe in her hometown of Barranquilla, as seen in a picture featuring Vegas on the nightclub set.

He wrote on Twitter, "How could our video not be a hit if we have the happiness of our people from Barranquilla?"

Vives is no stranger to working with a beauty queen - he met his wife, former Miss Colombia Claudia Elena Vasquez, on the set of his music video for Dejame Entrar in 2002.