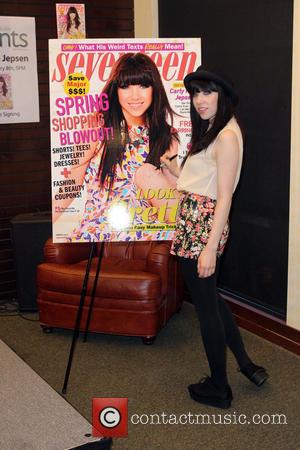 Carly Ray Jepsen's call me maybe was easily the most infectious song of 2012, but considering there isn't a Grammy award for 'Most Infectious' (there totally should be), she'll have to make do with Song of The Year and Best Pop Solo Performance - not bad going really.

But the decision to release 'Call me Maybe' wasn't as easy as you'd think, as Jepsen regales to the L.A Times when asked if she knew if she was on to a winner. "No ... to be honest, and this might sound silly, but I was quite content with how things were going in Canada. I was shaping out a career there, and I was really excited because I'd had my first ever real record deal," she recalls. "I can remember we were choosing between "Call Me Maybe" and another song, "Curiosity." The moment my aunt started dancing to "Call Me Maybe," and she doesn't really dance to anything, I realized maybe we had something."

And have something she did. 'Call me Maybe' shot to the top of the charts and wouldn't be budged for 9 whole weeks, hurtling Jepsen towards global fame. The Grammy's recognition of her music does come as surprise, though, given that they often ignore huge pop songs, as Justin Bieber just keeps on finding out.