On Wednesday (May 14th) the 57 year-old actress told reporters, "They didn't hire me, they hired me minus 35 pounds." 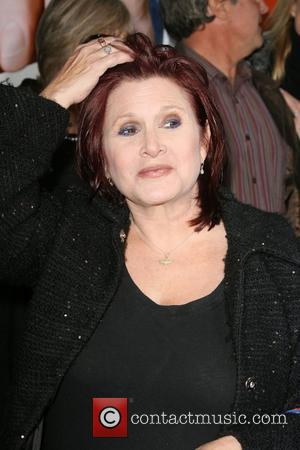 Carrie Fisher had to make some serious changes before reprises her iconic role as Princess Leia.

The 57 year-old actress is returning to shoot the highly anticipated 'Star Wars Episode 7' 35 pounds lighter, as she revealed on Wednesday night (May 14th) the studio instructed her shed the weight.

While attending The Final Auction Preview Night by Profiles in History in North Hollywood, California, Fisher told reporters, "They didn't hire me, they hired me minus 35 pounds."

Her mother, Debbie Reynolds, joined her at the lavish LA event, who also confirmed that her daughter has been shedding the weight.

"She worked her body off for one year to not have a body," Reynolds said.

Fisher's weight has been a hot topic as of late, mainly due to Debbie telling Mario Lopez on Extra last week that her daughter lost 40 pounds for the Star Wars flick.

"She's been on a diet ever since [she was cast in the film], because you know they have to be up to par, so she looks terrific," the 82 year-old said. "She's very excited, as we all are, because we all love Star Wars."

Carrie's portrayal of Princess Leia became memorable due to her wearing a gold metal 'slave' bikini in 1983's 'Star Wars Return of the Jedi.'

The actress and writer is one of three cast members who are reprising their roles, as she joins Matt Hamill (Luke Skywalker) and Harrison Ford (Han Solo) for 'Episode 7.' But it was not director J.J. Abrams who asked her to star in the movie, it was George Lucas.

"Did George personally ask me [to do the film]? Yes, he did," she said, adding that the first cast reading in London in April was "great" and she had "a wonderful time."

However, it wasn't a surprise that she has been forbidden to talk about any details of 'Star Wars.'

Debbie chimed in, "She was very good to come tonight and to do press and come here for her mother, and I knew she would be in trouble and everyone would ask about Star Wars. Is she going to talk about it? No, she's not allowed to." Carrie and Debbie at the LA event on Wednesday