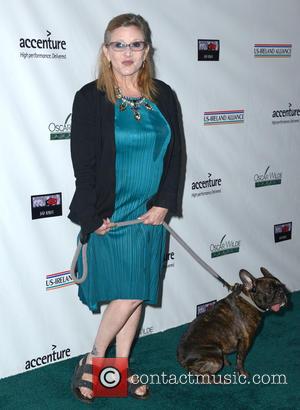 Carrie Fisher is convinced the new Star Wars movie is cursed because she narrowly escaped injury in a nasty car accident just days before her co-star Harrison Ford cheated death in a horrifying plane crash.

The Indiana Jones star reportedly suffered a broken pelvis and ankle after crash-landing a vintage aircraft on a golf course in California on Thursday (05Mar15) when the plane suffered engine troubles shortly after take-off.

He is now recovering in hospital, and his longtime co-star Fisher, who also appears alongside Ford in new blockbuster Star Wars: Episode VII - The Force Awakens, has now revealed she was in a scary car accident on 1 March (15), just days before her friend's plane crash.

She tells Britain's Mail on Sunday newspaper, "Things happen in threes. I'm about to call (co-star) Mark Hamill to make sure he's Ok. I have a horrid feeling there's a curse going on here... What is funny is that last Sunday it was raining hard in L.A. I was driving to the art store and I got into an accident. It wasn't that serious and I wasn't hurt but it's the first car accident I've ever had. I drove home and that's when the wheel came off my Bmw. My assistant told me I could have died if the wheel had come off when I was on the freeway. Then I was watching the news and saw Harrison had his crash. I'm a bit worried it's the curse of Star Wars."

Ford's plane crash came just months after he broke his leg on the set of the movie in the U.K. and had to take a hiatus from filming while he recovered, and Fisher admits the accident was "more serious than was let on", adding, "It could have been billions of times worse.

Fisher goes on to reveal she has sent a case of beer to Ford as he recovers from his plane crash injuries in hospital as part of a long-running joke between the pair.

She explains, "(One time) he said, 'Look, do you want to fly or can we have a beer?' He wouldn't have a drink if we were going to fly. It became something of a joke between us that I chose to have a beer that time rather than fly. I sent him some beers to the hospital with the message, 'You should have had a beer this time'."