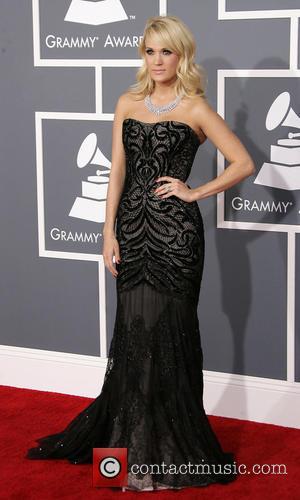 To say a person or performer lights up a room is often merely a turn of phrase, but when it comes to Carrie Underwood, it is meant in the most literal of senses. Her sensational performance at the 55th Grammy Awards last night in Los Angeles was given something extra by her extraordinary dress which acted as a screen for which to project a variety of beautiful light imagery onto.

Underwood proved that her win for Best Country Solo Performance was well deserved as she sang 'Blown Away', the track for which she won the award. The incredible Theia couture gown was adorned with roses, butterflies and more abstract shapes as the song went on. The singer had to stand perfectly still for the effect to work, which she managed to do effortlessly.

As the Daily Mail reports, the dress was designed by four people and took 80 hours to make. With hand embroidered Swarovski crystal detailing, and 10 yards of satin, it was managed to bridge the gap between fashion and technology. And despite it being difficult to tear your eyes away from the dress during her performance, that was part of the effect. "There are so many big performances at the Grammys and sometimes I like to just stand still and perform," she said. "So (the dress) was the best way to do it, to create a cool environment." She never fails to put on a great show