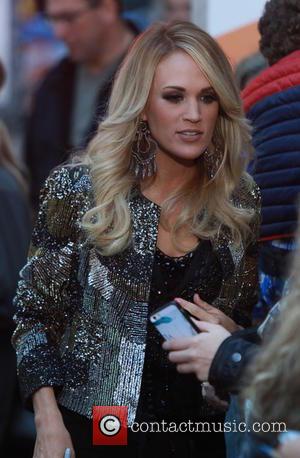 The singer reveals she and her husband, ice hockey player Mike Fisher, had three names on their shortlist as they prepared to become first-time parents, but they crossed off Christian as the hype surrounding the film adaptation of E.L. James' book reached fever pitch ahead of its February (15) release.

"It was a toss up between Isaiah and Caleb and Christian was on the list too!," Carrie tells U.S. breakfast show Today. "That was when Fifty Shades of Grey was coming out, like, right around that time, and I was like, 'Christian's off the list, babe.'"

The franchise's titular character, Christian Grey - a bondage-obsessed businessman who introduces his young lover to S&M - was played onscreen by Jamie Dornan.

Carrie and Mike eventually decided to name their boy Isaiah over their other favourite, Caleb, and they soon discovered they weren't the only new parents in love with Biblical names.

"We went with Isaiah and some good friends of ours, who we hadn't discussed names with at all, they had their baby a week after (us)," she recalls, "and they were like, 'Meet baby Caleb!' and I was like, 'Oh my gosh, that would have been (bad).'"

Carrie, who gave birth to Isaiah in February (15), is now learning to balance her work and home responsibilities as she promotes her new album, Storyteller, but she recently admitted she is constantly battling "mummy guilt".

"You feel guilty about every single thing, every decision you make, everything you do," she told America's People magazine.

She also confessed she is struggling to produce enough milk to breastfeed her newborn.

"It's hard," she added. "My supply is pretty nil (nothing). We have to supplement with formula. I'm doing the best that I can."

However, Carrie insisted that despite her breastfeeding issues, she couldn't be happier with her role as a new mum: "I never dreamt of my wedding day and the perfect guy. Then I met Mike, and I was like, 'Wow, so now I know what I was missing.' And the same with my son. I was never like, 'I want kids so bad.' And now that I have Isaiah in my life, I'm like, 'What did I do before?'"