Carrie Underwood is "proud" of her 'The Sound Of Music Live!' performance and responds to the heavy criticism she received by branding them "mean people." 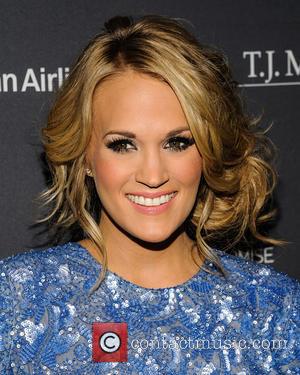 NBC's live action television production of the 'The Sound Of Music' aired this Thursday (Dec 5th) and like every remake, the comparisons and critics were at full flow.

Carrie Underwood starred as 'Maria', the character Julie Andrews made iconic in the 1965 film, and although she feels proud of the production, the twitter world were very vocal in their criticisms.

The tweet followed a tirade of hatred from the social media site, and one of the unimpressed viewers was Kym Karath, who played the youngest child, 'Gretl Von Trapp' in the original film.

"Love Carrie Underwood but this role is just not right for her," Karath posted. "She is lovely her voice is beautiful but acting is wrong."

Harsher words came from the 55 year-old in earlier in the night as she tweeted, "Must admit some scenes are actually painful to watch."

Adding, "Mystified & disappointed so far by SOM special. So far only happy with Stephen Moyer."

Read all the reviews of Thursday's production here

Just over a week prior to the show, Underwood revealed her daily abuse from disgruntled fans, "I get hate Tweets and stuff like, 'You're not Julie Andrews!'" she told Entertainment Weekly's Entertainers Of The Year issue. Underwood continued, "I know I'm not Julie, Nobody is and I would never pretend that I was. I know my place."

The negative reaction didn't dampen her spirit after the show, which pulled in 18.47 million viewers, as Underwood tweeted, "Glory to God tonight...I couldn't be more proud. What a tough thing to pull off and we did it! I am so blessed!!!" Carrie Underwood was 'proud' of her performance in the NBC production