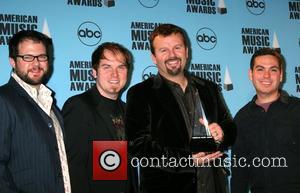 Canadian Christians Casting Crowns were the big winners at Wednesday's (21Apr10) Dove Awards, taking home the night's Artist of the Year honours.
The group, who also performed at the annual celebration of gospel and inspirational music, has claimed the event's Group of the Year title for the past five years. This year, that award went to South Carolina band NEEDTOBREATHE.
Sidewalk Prophets claimed the Best New Artist Dove, while Brandon Heath picked up his second successive Male Vocalist prize and Francesca Battistelli ended Natalie Grant's four-year Female Vocalist run.
It was a very happy night for Battistelli, who also claimed the award for Short Form Music Video (Free to be Me) and performed - she used the event to announce she is pregnant.
Jennie Lee Riddle was also a double winner - she claimed Songwriter of the Year and Song of the Year (By Your Side) honours.
The 41st annual Dove Awards took place in Nashville, Tennessee. Performers at the event also included Jordin Sparks and Grant, who duetted, and Bebe and Cece Winans.