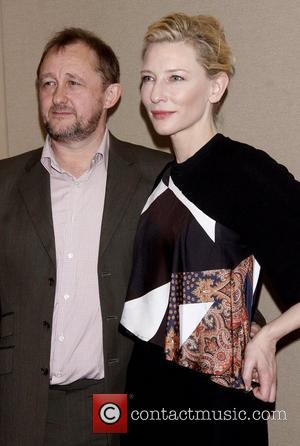 Cate Blanchett stunned at the opening of her play 'Uncle Vanya' at New York's Lincoln Center Festival in New York over the weekend. Blanchett, 43, took over the Sydney Theatre Company in 2008, and has brought the cast and crew of the Chekhov play over to the United States.
With her blonde hair up, the Oscar winner wore a daring geometric black and white dress and carried a clutch bag. She finished off the look with black boots with bow front detail, according to the UK's Daily Mail. The play, adapted by Blanchett's husband Andrew Upton, is a labour of love for the couple (and co-directors) who met in 1996 while Cate was performing in another Chekhov play, 'The Seagull'. The Australian cast of 'Uncle Vanya' includes Hugo Weaving as 'Astrov', Hayley McElhinney as Sonya, as well as John Bell, Sandy Gore, Anthony Phelan, Andrew Tighe and Jacki Weaver. The production runs from July 28, 2012 and tickets range from $25 to $200.
Despite her work with the Sydney Theatre Company, Blanchett has no less than seven movie projects in development. She is currently shooting Terrence Malick's 'Knight of Cups' with Christian Bale and Natalie Portman, and has also signed up for Woody Allen's next movie. It was also recently announced that she would star opposite Colin Firth in 'Skinny and Cat', set for release in 2014.