Cate Blanchett Looking Typically Radiant At The Hobbit In Wellington

Peter Jackson and his team repaid New Zealand for its hospitality this week, by hosting the world premiere of the new Lord of the Rings film The Hobbit in central Wellington. The country has played host to some of the biggest movie stars on the planet for the past year while Jackson shot the film on its rolling green hills.

More than 100,000 turned out for the premiere of the movie, which has sparked Middle Earth mania in New Zealand. According to The Telegraph, presenters on national radio greeted listeners in fictional elvish language, while newspapers came equipped with complimentary Hobbit posters. Thousands of fans turned out for the premiere at the Embassy Theatre in full Lord of the Rings garb, delighting stars including Cate Blanchett, Martin Freeman and Elijah Wood who walked the red-carpet. Wellington actually renamed itself 'The Middle of Middle Earth' for the event, which has been regarded as a godsend for the country's tourism industry. Delays and union disputes have disrupted the production of The Hobbit, though despite wrapping up the hugely anticipated movie, director Peter Jackson admits he is still nervous about the critical reception. "Nothing's ever perfect and it never will be, it's a real mistake if you say we're stopping now because we've made the perfect film," he told Radio New Zealand. "You never have and you never will.I've got severe fatigue right now, but only because I've just finished the film. There's been all sorts of obstacles" The movie (and the forthcoming second part) was shot back-to-back in New Zealand with an estimated budget of $500 million. It depicts Bilbo Baggins - played by Martin Freeman - and his quest to reclaim the lost dwarf kingdom of Erebor from the dragon Smaug. All the familiar names are back, with Elijah Wood reprising his role as Frodo and Cate Blanchett returning as Galadriel. Sir Ian McKellen, Hugo Weaving, Billy Connolly, Benedict Cumberbatch, Andy Serkis and James Nesbitt also make appearances.

Blanchett, who attended the premiere with her son Roman, wore a radiant red, white and black ensemble. Co-star Martin Freeman opted for a sharp suit, despite the blazing Wellington heat, though cleverly had his trendy sunglasses at hand. Elijah Wood had a similar idea, donning a slick navy suit with round John Lennon-esque sunglasses. It's a miracle that The Hobbit ever made it to the screen, with Mexican filmmaker Guillermo Del Toro pulling out of the project in 2010. Jackson was forced to take over, though the New Zealand government's labour laws delayed production, before the director was struck down by ill health. There were even allegations of animal cruelty and a U.S. lawsuit filed by JRR Tolkien's estate over market rights. No More Office Jobs: Martin Freeman Takes The Lead In The Hobbit

Check out our full gallery from The Hobbit premiere in Wellington!

Cate Blanchett to star in A Manual For Cleaning Women 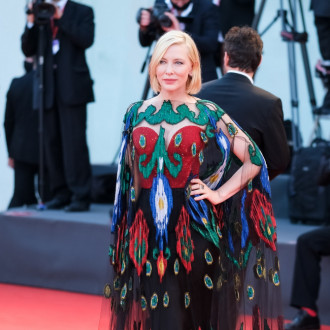