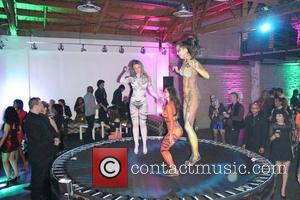 Singer Cee Lo Green has quit the U.S. version of The Voice for good.

The Forget You hitmaker has been a judge on the reality singing competition since 2011. He and fellow judge Christina Aguilera took a hiatus during season four last year (13) but returned for season five.

However, Green will not be coming back to the judging panel for season six and the singer has now confirmed he is leaving the show for good.

He tells U.S. talk show host Ellen DeGeneres, "I'm not coming back guys... I'm not coming back at all... I don't want to wear out my welcome there. You know what I'm saying. I have so many other things that I want to do. I haven't released an album in four years. I'm almost done with my album."

In addition to working on a new record, Green is about to embark on a joint tour with Lionel Richie. He also has television projects in the pipeline with NBC, the network behind America's The Voice.

He adds, "I'm going to continue my relationship with Nbc. I have a television show development deal with them as well and hopefully some other talk show opportunities for later in the year."