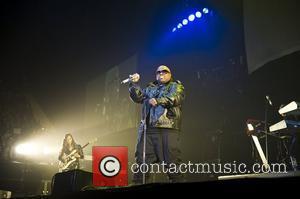 Cee Lo Green has spoken out to dispel speculation he won't ever reform Gnarls Barkley, insisting he will one day work with musical partner Danger Mouse again.
The rapper/singer and his DJ pal haven't released anything together since 2008 album The Odd Couple, while Green has been working on solo projects.
Green's success has caused fans to fear he will never reteam for a Gnarls Barkley record, but he insists that although nothing is scheduled yet, when they're ready they'll release more material.
He tells CNN, "Of course. It's an enigma, if you will. It's a monster. It's a noun. It's a person, place and thing, you know what I'm saying? So when I'm emotionally able to go back in that hole in the wall, I'll go back in there. And Danger Mouse will be waiting for me, afro intact.
"We have an awful lot in common. He's a very funny guy. You wouldn't know it. He's very smart. I've described Danger Mouse on a few occasions as a picket fence around my garden of wildflowers, can you dig it? Makes sense."