Describing your wife as "completely sane" is one thing, but revealing she was also your ''sugar mama'' is something else entirely. 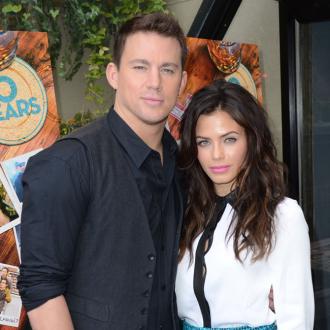 Channing Tatum's wife, Jenna Dewan Tatum, apparently used to be his ''sugar mama''. The Tatums met one another on the set of 2006's 'Step Up' and recently had a daughter, Everly, together. Channing Tatum is now a bit of a household name, but back in the days when he was struggling to pay his rent, Jenna was there for him. This led him to believe that she was the woman he was destined to spend his life with.

The 33-year-old star of the upcoming 'White House Down' took part in an interview with 'Elle' website, saying: ''I was broke and I couldn't pay my half of the rent when we were first together. She was basically my sugar mama for six months.'' He also relayed the story of a holiday the two shared in Hawaii, which tested and strengthened their relationship in its early days.

He explained: ''We were on our first trip together, in Hawaii, trying to find this waterfall. There was a trail with markers and stuff, but we had to walk for about four and a half hours [to find it]. Then I look up--we don't have four and a half hours of light to get back. We don't have flashlights. We don't have anything. It starts to get dark, so we're jogging back a little quicker. You couldn't see your hand in front of your face. Most people would panic. 'This is your fault! Blah blah blah!' But Jenna was completely sane, just trying to get the job done. We got out, covered in mud, and there was one more beer in my bag. We shared it by the side of the road.''

He goes on to explain the secret to a long and healthy relationship, citing honesty as the cause for their happiness: ''I think communication and being brutally honest about the things that you want. No matter what, talk to each other. That stuff you might be nervous to hear? You gotta want to know.''