Channing Tatum Plans On Having Kids

Channing Tatum thinks he and his wife Jenna Dewan will have children ''at some point'' but are in no rush. 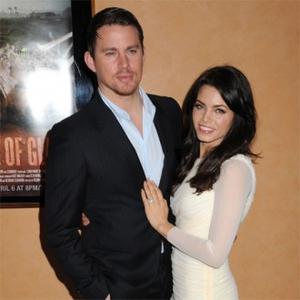 Channing Tatum plans on having kids "at some point" in the future.

The 'Vow' actor - who has been married to actress Jenna Dewan for three years - admits the couple are likely to start trying for a baby soon,

He said: "We're married, so it doesn't really get any farther than that. Other than kids."

Jenna added: "We want kids in the future at some point."

Despite the couple's busy work schedule, they make sure to spend time with each other by having a rule by where they never spend too much time apart.

She added to Hollyscoop.com: "We do everything other happy couples do ... You communicate, you make sure you see each other.

"Our schedules make it a little difficult at times and you have to make sure you have, like a rule. We have a like a two-week rule. So we see each other every two weeks. If you want to make it work, you make it work. That's what happens."

The 31-year-old hunk has previously revealed he loves leaving notes around for his wife to show how much he loves her.

He said: "I see caring for somebody as a creative outlet. I like drawing little faces and writing little stories and hiding them in places.

"I'm a practical joker. My favourite one is putting one under the toilet seat. She always wakes up before I do, so I enjoy the surprise of, 'Haha! I got you!' "