Channing Tatum told his wife Jenna Dewan to stop waxing after experiencing the pain of the hair removal procedure for himself for his role as a stripper in 'Magic Mike'. 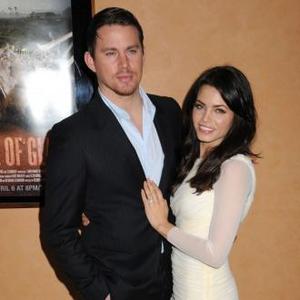 Channing Tatum has told his wife to stop waxing.

The 32-year-old actor underwent an intensive beauty and grooming regime for his role as stripper Michael Lane in his new film 'Magic Mike' and he has given his wife Jenna Dewan permission to stop waxing her legs after undergoing the painful hair removal procedure himself.

Speaking on UK TV show 'This Morning', Channing said: ''I didn't want to shave because I just wanted to do it once. That was a big mistake, I will never do it (wax) again!

''I don't know how women do it. I did have a huge amount of compassion, but after I told my wife that she doesn't have to do it anymore, she still does it - so I have zero compassion!

''I said let everything go, no one needs to go through that.''

The film - which also stars Matthew Mcconaughey, Alex Pettyfer and Joe Manganiello - is based on Channing's own experience of stripping when he was 19 and short of cash.

The Hollywood heartthrob recounted how his most embarrassing moment on stage was the first night he ever performed one of his saucy routines, when he realized his sister Paige was in the audience.

He explained: ''My very, very first night. I did a Boy Scout routine. I had no idea. We do not have that relationship; we don't even hug for that long...

''She's' sitting there with six of her friends in The Front row and I'm singing ... and I'm just like, 'This is terrible!' It was by far one of my worst nightmares.''

Channing, who also co-produced the movie, has high praise for his co-star McConaughey's comedic performance in 'Magic Mike' and he believes he was destined to portray Dallas.

Channing said: ''He's my favorite thing in the whole movie. I promise when you watch it, you're going to be awed. This was the thing he was meant to play.''