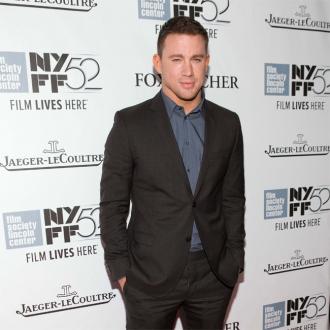 Channing Tatum hopes he never has to wrestle again after shooting 'Foxcatcher'.

The 34-year-old actor stars as Olympic gold medal-winning grappler Mark Schultz in the Oscar tipped crime drama and he admits he found the sport ''suffocating'' when he was training for the role.

In an interview on UK TV show 'Lorraine', he said: ''If I never wrestle again I'll be happy, I really will. It is such a painful and suffocating sport, that's how I'd describe it to you - you just can't breathe. You're constantly asking yourself, 'Am I dying? or am I just hurt right now?' ''

After trying the sport, Channing insists he has nothing but admiration for Olympic wrestlers, saying: ''I could train for years and never be able to do what these guys do. It's so hard.''

The Hollywood hunk also admitted he much preferred stripping off in 'Magic Mike' to wrestling in the Bennett Miller-directed film.

When asked what profession was easier to recreate, he said: ''Both of them are physical, wrestling is way more painful.''

Channing has paid tribute to co-star Steve Carrell for his mesmerising performance as wrestling enthusiast and multimillionaire John Eleuthère du Pont in the film, a role which is a massive departure from the comedy parts he is renowned for.

He said: ''I grew up watching Steve and you get this perception of who you think he's going to be ... A lot of people I know now are comic actors and everyone thinks they're always like that and that's not the case, that's just a skill that they have and they wield it. I think that's why Steve can so adeptly come in and do a character that's probably shocking to people but his comedy in the other roles he's done don't come from him being the funny guy they come from him having a whip smart perspective into a situation. This movie (Foxcatcher) is not funny, it's weird. If you're having a bad day this might not be the movie you want to see.''