Channing Tatum, Paris Hilton And Gwen Stefani Were Among The Celebrity Guests Who Embraced The Halloween Spirit On Saturday (31oct15) To Attend A Costume Party Hosted By George Clooney. 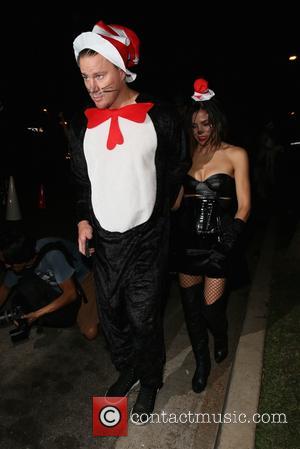 The Ocean's Eleven star threw the Casamigos Tequila Halloween Party in Beverly Hills, California on Friday (30Oct15) to promote his liquor brand, and the bash wasn't short of famous faces.

Paris posed as a sexy Viking, complete with a bronze shield, while Channing and his wife Jenna Dewan-Tatum both dressed up as Dr. Seuss character Cat in the Hat, and Gwen showed up as a bloodied cowgirl. Josh Duhamel channelled his inner Karl Lagerfeld, donning a black suit, sunglasses and a white wig, while his wife Fergie dolled herself up as the Chanel fashion legend's feline, Choupette, in a sexy all-white get-up with matching cat ears.

George's business partner, Rande Gerber, and his supermodel wife Cindy Crawford also wore matching costumes as members of the Hells Angels biker gang, while country star Blake Shelton simply threw on a Mexican Serape poncho over his plaid shirt and pulled on a dark wig and beard, which he wore under his trucker cap

Meanwhile, in New York City, Heidi Klum hosted her annual Halloween bash on Saturday (31Oct15) and stunned photographers by walking the red carpet as animated stunner Jessica Rabbit. The German beauty, who is known for her elaborate costumes, shared behind-the-scenes snaps of her transformation on Instagram.com, showing her make-up artists attaching prosthetics to her face, chest and butt to mimic the voluptuous Who Framed Rodger Rabbit? character, while she even performed Jessica Rabbit's signature song, Why Don't You Do Right?, from the 1988 film for her guests.

Model Gigi Hadid, who dressed as Sandy from Grease, shared a photo of the pair on Instagram, and simply captioned the snap, "you legend! QUEEN OF HALLOWEEN".

Other guests at the Big Apple party included Jennifer Lopez and her on/off boyfriend Casper Smart, who posed as skeletons in black tie, with creepy white make-up and matching contact lenses.