Review of Simpatico Album by Charlatans 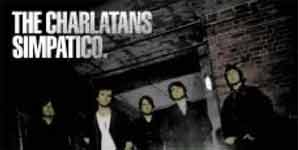 Recorded at Hook End Manor and mixed at Townhouse Studios in late 2005, "Simpatico" marks the return of a band who have been around for an impressive 16 years. It would appear that The Charlatans are as hungry as ever, having recently played at music showcase festival SXSW in Texas, they'll be on tour from the end of April, before festival gigs at T In The Park, Oxegen, and V."

Everything that is good about The Charlatans can be found in opening track and lead single "Blackened Blue Eyes", a piece of funked up rock'n'roll carried on a hypnotic piano riff and interjected with chiming guitars. The dance fusion continues on "NYC (There's No Need To Stop)", a party anthem that captures the spirit of urban nightlife with its hollering backing vocals and siren noises. "Simpatico" then takes an unexpected turn, for it becomes essentially a reggae-rock record. The eerie rhythm and choppy guitars of "For Your Entertainment" completely change the dynamics of the album, and the militant drumming and repetitive chords of "Dead Man's Eye" maintain this. Both are mediocre album filler, and it is with some relief that "Muddy Ground" manages to be a fantastically uplifting track due to hovering layers of piano over a solid bass.

For the next few tracks, prepared to be whisked to the Caribbean. Harmonicas warm the casual reggae of "City Of The Dead" and more chiming pianos, while the slow tempo of organ and guitar on "Road To Paradise" make you believe it's siesta time. To the album's benefit, the volume is cranked back up for "When The Lights Go Out In London", which is a master class in arrangement that results in a sound that takes residency in your ears. It's a great lead into the haunting ska of "The Architect", which features and intense and endearing vocal performance from Tim Burgess. The build up to the finale is fantastic, and proves the track to be an outstanding moment. By contrast, "Glory Glory" is soothing in nature, but adds to the strong climax of the record. Quite how fans will react to The Charlatans' experimentation is to be seen, but it's credit to the band that they are willing to try something different and add to their repertoire â and it is this characteristic that has enabled them to maintain their popularity. For those who do enjoy "Simpatico", you could do worse than check out The Dead 60s self-titled debut, which was released last year.