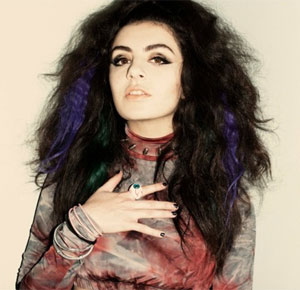 21-year-old Charlotte Aitchison aka Charli XCX is pleased to announce that she'll be supporting US rock trio Paramore on their upcoming UK arena headline tour in September, which will include two dates at London's Wembley Arena. Unfortunately, this means that Charli has had to postpone her upcoming US September headline tour until October/November.

Charli commented: "I'm very happy to have been asked to support Paramore on their UK tour. I've never really done shows in the UK outside of London before so it's going to be something different and kind of scary for me. Of course I am really, truly so so sorry to everyone who got tickets to my US shows, as now I will have to reschedule those dates and I hate the fact that I will have let lots of people down. It's weird, I always feel strangely at home when I play shows in America and the fans I have out there are literally the best, most killer fans in the world. I'm upset that you guys are going to be disappointed and annoyed at me, as I really did have big things planned for this tour, so it's very sad. I'm working really hard to reschedule the dates right now and all I can promise you is that the shows will be even bigger and better than anything I've ever done before."

Following what has already been an incredible year, having released her breakthrough debut album True Romance in February to rave reviews, writing her first UK #1 single 'I Love It' for Swedish duo Icona Pop which has gone on to sell over 3 million copies worldwide, and currently writing in the studio with some of the biggest names in pop, Charli XCX will take to the BBC Radio 1 Dance stage at Reading & Leeds Festival this coming weekend. She plays Leeds on Friday 23 August at 6.30pm and Reading on Sunday 25 August at 6.45pm. She'll also headline London's Islington Academy on 30 November and was recently unveiled as the new face of Max Factor's Wild Collection advertising campaign.

Currently in the studio working on her follow-up album, watch this space for news of the rescheduled US dates and more.