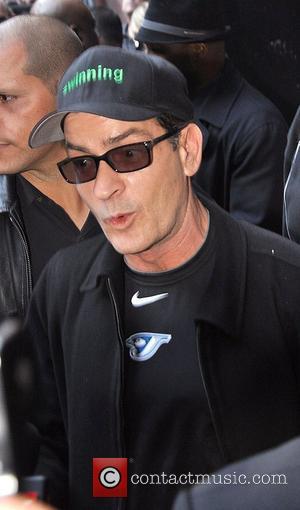 Picture: Charlie Sheen arriving at Massey Hall for his Toronto's stop for 'My Violent Torpedo of Truth Tour'. Toronto, Canada - 14.04.11

Charlie Sheen is urging fans to join him on a walk through the centre of Toronto, Canada on Friday (15Apr11) to publicise bipolar disorder.
The former Two and a Half Men star - who famously told viewers of his online webcast he is not bipolar but "bi-winning" - plans to stroll from his hotel in the city to local arts theatre Massey Hall.
He wants to raise public awareness of the illness, which is back in the headlines after Catherine Zeta-Jones confirmed she received treatment for bipolar II earlier this month (Apr11).
Sheen has taken to his Twitter.com page to announce details of the stunt and encourage his fans to join him.
He writes, "Bipolar Awareness Walk!! Come join me at 6pm and walk with me from The Ritz Carlton to Massey Hall..! Show your support..!! Biwinning ybw (you've been warned)."