Charlie Sheen has set up a website for people to make donations to help tornado survivors in Alabama - and is offering a signed baseball to anyone who gives more than $100. 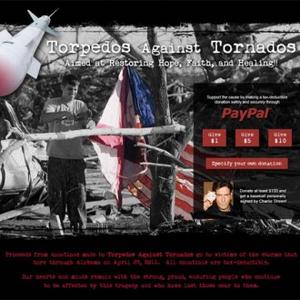 Charlie Sheen has set up a website to raise money for tornado victims in Alabama.

The former 'Two and a Half Men' actor has launched TorpedosAgainst Tornados.com which is asking people to donate as much money as they can to help those individuals affected by the twisters that hit Tuscaloosa last week, killing what is believed to be around 200 people.

Those who give at least $100 will even receive a baseball personally signed by the 45-year-old star.

The website states: "Our hearts and minds remain with the strong, proud, enduring people who continue to be affected by this tragedy and who have lost those dear to them."

This week Charlie paid a visit to the areas of the city which were ravaged by the natural disasters and vowed to hold a star-studded fundraiser in form of a baseball game or "multimedia show".

He said: "I'm hopeful that I can do whatever I can to lend support, compassion and hope.

"I'm here to bring the focus of the world down. I'm on a bit of a recon mission and then we're going to plan a fundraiser and come back in Full Force."

To make a donation to the Alabama tornado survivors through Charlie's website go to www.torpedosagainsttornados.com.