Charlie Sheen's poo slinging threats might land the star in more trouble than he expected. 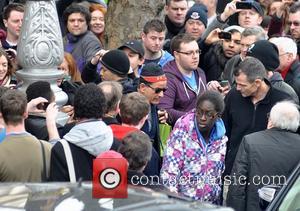 Picture: Charlie Sheen - Charlie Sheen spotted on Grafton street in Dublin. He shopped at James Fox, Cigars, Whiskey and Wines Shop before heading to the...

The latest development on the Charlie Sheen versus Fancy Private School – now the parents of children attending his daughter’s former school want the Two and a Half Men star prosecuted.

Does that surprise anyone though? After Sheen put forward a call to arms for all of his fans, urging them to smear the school building with poop, something like this was bound to happen. Granted, Charlie’s tiger blood might have been boiling with righteous anger, after his 9-year-old daughter reportedly got bullied at the institution and the management turned a blind eye on her. But perhaps the actor didn’t choose the best way to seek justice. Last Thursday, a parent meeting was held at Viewpoint School in California to address Sheen’s rants and his devious dog poop plot. As far as the parents are concerned, Sheen’s numerous antics over the years – you know, things like threatening to shoot someone and holding a knife to his ex-wife’s throat – make him untrustworthy and a straight up danger to society. They would therefore want to have the actor prosecuted on charges of inciting violence and criminal threats.

He might be rightfully angry, but Charlie Sheen's threats could still get him into trouble with the law.

According to TMZ, the parents plan on getting in touch with the authorities. But as far as their chances, sure, Charlie Sheen’s previous history has been questionable at best up until this point, but does a twitter rant about poop slinging really count as inciting violence? Suppose we’ll all have to wait and see. Suffice it to say though, that that will be one heck of an entertaining trial.