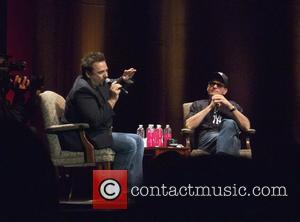 Charlie Sheen'S controversial new show sank in New York yesterday evening,
Charlie Sheen's 'Torpedo of Truth: Defeat is Not an Option' Tour, which opened in Detroit under a hailstorm of boos and bad press, made its New York debut last night in front of a sold-out audience at the legendary Radio City Music Hall.
The actor, who has been dominating tabloid headlines since his now-infamous TV interview with Katie Couric, has already played several cities across the US. Though his opening night was met with boos and walkouts from the audience, there was hope for fans after his Chicago leg of the tour received a standing ovation, the Daily Mail reported. However, last nights show echoed the Detroit crowd's sentiment, with Sheen being booed off stage.
Entertainmently Weekly called it 'an aimless and slovenly disaster.' The reporter added 'let me not mince words: it was Detroit all over again.'
Sheen made an explosive trip to the city last year when he trashed his room at The Plaza with an escort. According to the New York Post many of the luxury hotels - including the Plaza and Donald Trump's Waldorf-Astoria - made it clear that his custom would be 'unwelcome. '