'E-cigarettes' Bosses Thrilled To Have Chain-smoking Charlie Sheen Onboard 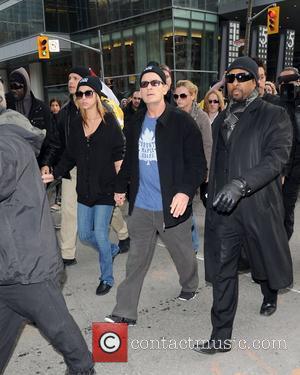 The brains behind a revolutionary electronic cigarette are thrilled to see Charlie Sheen is using their device to avoid a smoking ban as he tours North American theatres with his new one-man show, insisting if a chain smoker like him can get relief from the alternative, it can work for anyone.
The actor hit the stage in Toronto, Canada with his Smokeless Delite cigarette earlier this week (beg11Apr11) in a bid to circumvent the city's strict anti-smoking laws in public places.
Had he walked onstage with a lit cigarette in his hand, theatre bosses would have had to close the show.
Kyle Winther, the president of Smokeless Delite electronic cigarettes, is delighted Sheen is helping to promote his company's product.
He tells WENN, "Mr. Sheen is now smoking our cigarettes. Their clear and present benefits are taking the drag out of taking your next drag... The future of cigarettes is clearly here."
The actor isn't the first star to extol the virtues of the 'e-cigarettes' - Johnny Depp's character talks about the product in the movie The Tourist and Katherine Heigl showed up on the Late Show with David Letterman last year (10) smoking the e-cigarette indoors, and cooing, "Bet I'm freaking you all out right now, huh?"
The e-cigarettes allow the smoker to inhale nicotine while puffing out a cloud of water vapour.