Charlize Theron Convinced Mad Max: Fury Road Director George Miller Her Character In The Film Should Have A Shaved Head By Cutting Off All Her Hair And Sending Him A Bald Selfie. 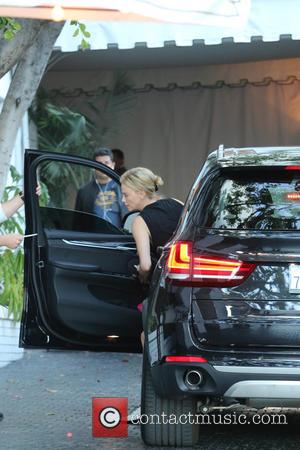 The actress woke Miller up in the middle of the night to ask for his permission to sport a new look in his film, and reveals the filmmaker was a little concerned about the shape of his leading lady's head.

She tells WENN, "I wanted something where I could kind of disappear I guess, and I didn't know how to do that with a ponytail. I had done a press junket and my hair was really fried and I had a night where I thought, 'What if we just shave it?'.

"I wasn't really convinced so I called George and woke him up at 3am. I said, 'What do you think about this idea?', and he was really quiet and then I could hear him take a deep breath and I took that as a positive. Then I found out recently that he was very concerned about the shape of my head!

"I didn't have buzzers so my friend brought them over and I just was gonna let him do it but he was like, 'No, you should do it', and then 45 minutes later it was off and we sent a selfie to George.

"He wrote me back, 'Awesome Furiosa!'"

The actress adds, "The amazing thing after that was I was 20 minutes early to everything in my life. It's unbelievable how much time we spend on our hair. I think I emptied two (trash) bags full of hair products and brushes and there's something very freeing in that."