Charlize Theron has called herself a ''miserable ****''. 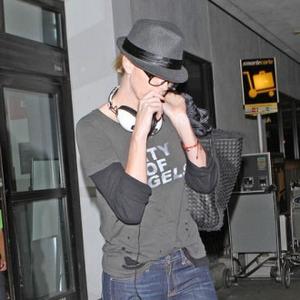 The 36-year-old actress stars as self-destructive teen author Mavis in forthcoming comedy 'Young Adult' and insists she didn't have to try too hard to achieve the series of unpleasant expressions her character displays.

"I realised how important it was, just the look on the face thing, when we did the first four days in Minneapolis. By day two I was like, 'Wow this is really kind of insular.'

"I realised I had to come up with a way to show who this character was without really saying that much."

Charlize was attracted to the movie - which was written by Diablo Cody and Jason Reitman - because the role was a "gift" with a fascinating background.

She told Total Film: "I mean, this character was eating cake for breakfast, lunch and dinner. It was just a gift.

"It was really interesting because I think the character could easily have been fun and outlandish and what's great about Jason being The Shepherd and Diablo writing is there was a foundation to it - it wasn't just 'Let's go for the joke'.

"All of those lines came from a place that had real circumstances."