Cher's visit to The Ellen Degeneres Show this week was definitely a family affair. 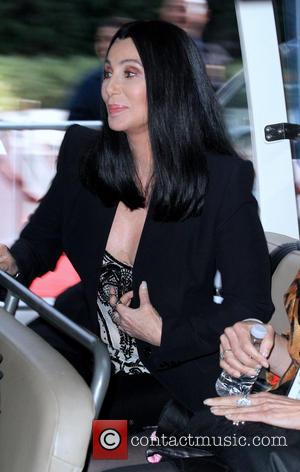 Cher stopped by Ellen yesterday to have for a chat about her life, her career and her son Chaz. Not before a quick outfit change for Ellen though, as it turned out she and Cher were wearing the same thing! Ok, they weren’t really, the whole thing was a gag by Ellen to tease her iconic guest’s appearance. On the day before, the talk show host tweeted a digitally altered image of Cher’s body in her infamous sequined bodysuit, but with Ellen’s head, instead of her own, The Daily Mail reports. Ah, the magic of image-altering software! The sailor hat was a nice touch as well.

The gags were set aside during Cher’s actual visit though, as she, her 86-year-old mother 86-year-old mother Georgia Holt and her 61-year-old half-sister Georganne LaPiere talked to Ellen about the coming out story of Cher’s son, Chaz Bono. Apparently Chaz didn’t go the traditional route and instead came out to his grandmother first, with Cher being the last one to find out that her son was gay.

'That's a big deal to come out to the grandmother,' DeGeneres said.

Cher is just the latest in a string of high-profile guests that the comedienne has poked fun at. Just this month, Ellen surprised People’s Sexiest Woman Alive, Gwyneth Paltrow, with a score of shirtless Chippendale dancers and presented Justin Timberlake with a life-size portrait of the two of them together, as a wedding present for his wife Jessica Biel. The singer became the latest target of Ellen's wit.