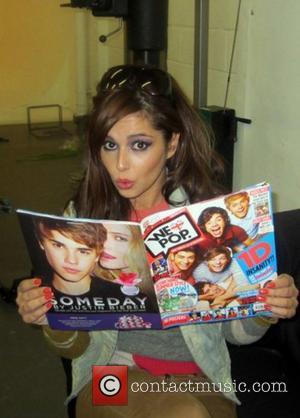 There's a lot on the line for Cheryl Cole has she prepares to make her big TV comeback during 'The Voice' semi-final on May 26th. Cole has largely kept away from the small screen since her disastrous run on the US 'X Factor' which saw her replaced swiftly. She'll have a chance to prove her star power by performing on 'The Voice,' though, and will also have a chance to prove her detractors including Louis Walsh and Cher Lloyd wrong by singing live - should she be bold enough to do so.
"Will.i.am is trying to persuade Cheryl to sing live. He's told her to make this her big UK comeback and to storm the stage, all guns blazing," a source told the UK's Daily Star. The insider went on to add that Cole had been working with Gwyneth Paltrow's fitness instructor, commenting "Following the disaster of her American X Factor sacking, Will's encouraging Cheryl to come back fighting. Cheryl has been working out with Tracy Anderson, who has transformed Gwyneth's body".
They added, "Cheryl is hoping to tone up and look her best for the performance. She's hoping to show Simon Cowell made a big mistake. Cheryl is on a mission to wow everyone." The pressure's on for sure, but you wouldn't bet against the feisty Geordie lass to bring the fight.