Cheryl Cole Jets Home For Kimberley Walsh Show: But Where Was Nadine? 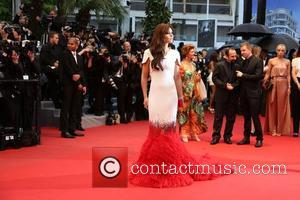 Cheryl Cole jetted home form the Cannes Film Festival this week to catch her band-mate Kimberley Walsh's final performance as Princess Fiona in Shrek: The Musical. Cole was joined by Sarah Harding and Nicola Roberts, though Nadine Coyle was nowhere to be seen, reports the UK's Metro newspaper.
Kimberley was stunned when Cole arrived at the show, considering she had attended the premiere of 'Amour' at Cannes on Monday (May 21, 2012). The 28-year-old singer had worn a stunning dress at the first showing of Michael Haneke's new movie, which fashion critics noted made her look as if she was "melting" into the red-carpet. Cheryl was a little more casually dressed for the Shrek show, donning skinny jeans and white jacket and making sure band-mate Walsh got all of the attention. Kimberly - who first appeared as Princess Fiona in September - posed for photographs with fans outside the Theatre Royal on Drury Lane following her final performance. After arriving home, the singer tweeted, "Going to sleep very thankful for all the amazing people I have in me life smiling".
Walsh - who will be replaced in the show by Carly Stenson - will now turn attention to the Girls Aloud reunion set for later this year, though whether Nadine Coyle will turn up for that, is anyone's guess.