Cheryl Cole and Nadine Coyle ''hugged out their differences'' in a chance meeting in a London club at the weekend. 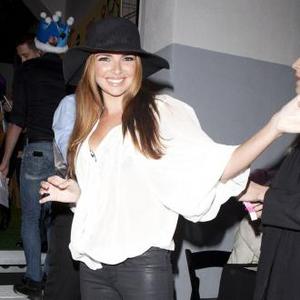 Cheryl Cole and Nadine Coyle enjoyed a night out together on Saturday (09.06.12).

The Girls Aloud bandmates had a chance meeting at London club Rose and despite constant speculation of a rift between US-based Nadine and the rest of the group, they appeared in good spirits and were enjoying one another's company.

An onlooker told the Daily Mirror newspaper: ''Nadine squealed with delight when Cheryl walked in. The girls shared a bottle of champagne. They hugged out their differences and even had a dance. Cheryl also got a round of shots in.''

The pair stayed at the venue until around 3.30am but left separately.

Nadine previously admitted she is not ''friends'' with her bandmates, Cheryl, Nicola Roberts, Kimberley Walsh and Sarah Harding, and she wouldn't choose to see them outside of work.

The group are expected to reunite later this year following a lengthy hiatus.