Cheryl Cole's mother Joan Callaghan is apparently mortified by her daughter's butt tattoo - a complex vine of roses, which coveres her entire bottom and reach up to the middle of her back - and has questioned whether she's done the right thing. 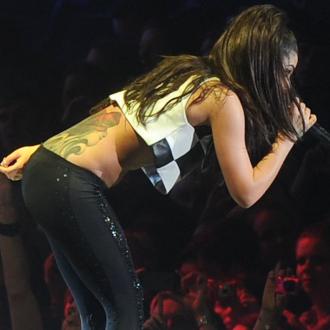 Joan Callaghan is said to have been left horrified after she discovered through a series of photos posted by Cheryl's tattoo artist Nikki Hurtado at the weekend that her pop star daughter's rose vine tattoo - which she had done around eight months ago - covers her entire bottom as well as reaching up to the middle of her back.

A source told the Daily Star newspaper: ''Joan phoned to ask her, 'What the hell is that?' She was shocked. She knew Cheryl was getting more tattoos done but had no idea how big this one actually was. It freaked her out to see it in pictures before seeing it in the flesh as well.

''Prior to unveiling it, Cheryl had only told boyfriend Tre Holloway the full plan, and he was behind her all the way. He told her he loved it. But her mum couldn't help asking if she'd done the right thing. Cheryl told her it was a bit late to be worrying now.''

The 'Call My Name' hitmaker's mum wasn't the only person to disagree with the new inking as Jodie Marsh - who has over 100 tattoos on her body - previously said it was a shame the singer had chosen a tattoo that completely covered her pert derrière.

Jodie said this week: ''Cheryl's tattoo? I'm the biggest tattoo fan in the world but even I'm not sure about it ... I think it's a brilliantly done tattoo and I think it's gorgeous, the only thing I don't like about it is that it hides her beautiful bottom. Why would you want to cover up that lovely bum?''