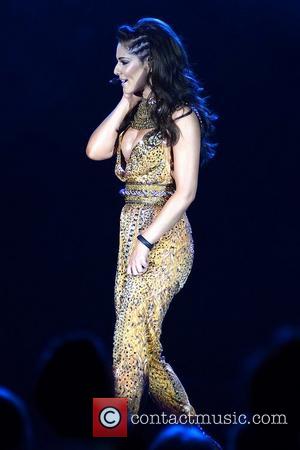 Picture: Cheryl Cole performs during her 'A Million Lights' tour at SECC in Glasgow Glasgow, Scotland- 15.10.12

After a three year hiatus, Girls Aloud, the most successful reality-tv music act of all time (according the Guinness World Records), are to reunite and hopefully continue their successes. True to form of almost every contemporary music act, their new single 'Something New' has been leaked online, although it has already been removed from the website upon which it originally appeared.

Girls Aloud relaunched their website last week with a ten day countdown on the site, which inspired and reinforced the rumours about their reunion. The official announcement of their come back was supposed to be this Friday, but it seems the leak of the video is enough evidence to confirm to all that they have definitely reunited. But for how long? NME report that Cheryl Cole hinted in her autobiography that this reunion will be brief. The book apparently suggests a greatest hits album and a 10th anniversary tour. She wrote: “We'll be working on a tour and greatest hits album. Then I think that's it for Girls Aloud. We've achieved more than any of us ever dared to dream of.”

Heat Magazine tried to describe the single by saying that it's a mix of David Guetta, Nicki Minaj, and some bits that “sound a lot like the "neeeeeoooooww" bits in Lady Gaga's Bad Romance.” We are somewhat unconvinced...

The girls originally went on hiatus to allow the members, Cheryl Cole, Nadine Coyle, Sarah Harding, Kimberly Walsh and Nicola Roberts, to pursue solo careers. Cole judged the X-Factor for a few years as well as enjoying a lucrative solo career. The other girls have also released some solo material, but they have also acted in TV and on stage, done some song writing, appeared in some musical collaborations and been on Strictly Come Dancing. The NME also reports rumours that the band will perform this November at the Royal Variety Performance at the Royal Albert Hall.