Chris Brown cosies up to Rihanna at the Grammys

Chris Brown cosied up to his on/off girlfriend Rihanna at the Grammy Awards last night (10.02.13), and the brunette beauty sparked speculation the pair are to marry after she wore a diamond ''engagement ring''. 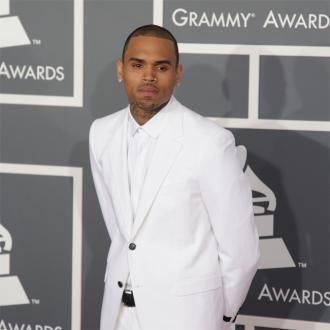 Chris Brown snuggled up to Rihanna in the front row at the Grammy Awards last night (10.02.13).

The 23-year-old singer hugged and leaned lovingly against his on/off girlfriend - who he is still on probation for brutally assaulting in 2009 - at the ceremony at Los Angeles' Staples Center, and the brunette beauty sparked online speculation the couple are to marry.

Rihanna appeared to be wearing a diamond ''engagement ring'' as she took to the stage at the prestigious awards, and several people took to Twitter to express their surprise at the 'Diamonds' hitmaker's band.

One fan wrote: ''Rihanna is wearing a diamond on her left ring finger. Really? (sic)''

Another tweeted: ''Rihanna engaged?!?! Or that's some type of promise ring? (sic)''

But Chris - who donned a white Lanvin suit for the event - posed on the red carpet with British singer Natasha Bedingfield, who he kissed on the cheek, while Rihanna showed off her curves in a crimson chiffon Azzedine Alaïa gown as she met the media.

Chris was lucky to attend the event at all after he was involved in a car crash on Saturday (09.02.13) when his vehicle hit a wall, and while he escaped unscathed, the Bajan beauty is said to have been worried about him.

A source explained: ''Rihanna is just relieved Chris is okay. She was like 'what the f**k' when she heard he lost control of the wheel. She blew his cell up and panicked even more when he didn't pick up. But then he called her back like 20 minutes later and told her he was 'all Gucci' and couldn't pick up because he was talking to the cops.

''After Rihanna talked to him, she took a deep breath and told him to 'be careful.' She asked if he needed anything, but he said 'he had everything under control. That scared her though. Rihanna knows first hand what it's like when the paparazzi tail you too aggressively. It's got to stop. People are already dying from trying to chase celebrities.''