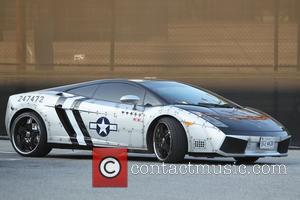 Three years after R&B star Chris Brown assaulted his girlfriend Rihanna, speculation suggests the pair have been "hooking up" for the past year. A source told US Weekly the pair "meet up very casually" claiming Rihanna visits Los Angeles to see him, though Brown's representative has denied the pair are set to give their romance another go.
Speaking to ABC News, Brown's spokesman said, "He and Rihanna are just friends. He is with his girlfriend, Karrueche, and is not cheating". The original story quoted a source as saying, "they can't get enough of each other. I don't see it ending well", with another insider suggesting Rihanna "loves to live dangerously". While Brown continues his attempts to defuse the speculation, his ex-girlfriend has been posting a series of provocative photographs on Twitter while enjoying the sunshine on her latest vacation. In the series of snaps, she's seen posing in her bikini on the beach, hanging out with friends, surfing and working out on a treadmill. Brown was sentenced to five years' probation after admitting to assaulting Rihanna on the evening of the Grammy Awards in 2009, where she was due to perform. At the time, Brown said he was "sorry and saddened" by the incident and subsequently underwent counselling, which he successfully completed.
Rihanna has focused on her bourgeoning music career since the attack, and this week announced she would be performing with Coldplay at the Grammy Awards on February 12, 2012. She tweeted, "My friends ColdPlay and I will be sharing the stage for a performance at this years Annual Grammy Awards. I'm in a great mood, and I got some Great News!!! PRINCESS OF CHINA GRAMMYS2012".