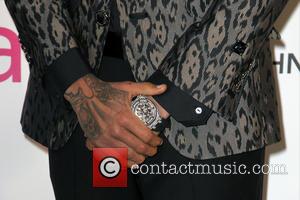 Chris Brown might now be happy now he’s back with Rihanna but it’s clear the feud between him and Drake is going to take some time to heel. You might remember that the pair and their respective entourages had an altercation last summer in a New York night club which left people injured and the club shut down.

Well, time hasn’t eased the bitterness over that evidently. According to an E! Online source, Brown was at the Emerson Theater in Hollywood last night (March 7, 2013), and things went wrong when he saw that the DJ had ‘Start From The Bottom Up’ by Drake cued up. At around 1:20 am, Brown apparently hopped up from his center table under the DJ booth and got on the mic. Telling the DJ to stop playing the music, he told the crowd "The DJ can play this s**t, but I want you all to know, F**k Drake!" and gave everyone the middle finger. Not the most mature of statements, and Brown decided that the assembled crowd would be up for some freestyle rapping, and so decided to churn out five songs worth of rapping, with football str Reggie Bush even running onto the stage to act as his hype man. He eventually left the stage at about 2am.