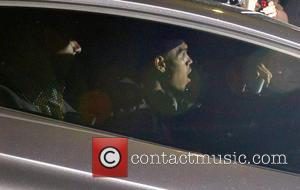 The Grammys will never fail to be a tumultuous affair for Chris Brown, although no year will ever be worse than 2009's revelation that he had beaten his then girlfriend (and now girlfriend again) Rihanna. This year wont get any worse than that, but he's already crashed his car, and if HollywoodLife are to be believed, his ex-girlfriend Karreuche Tran is also going to be at the awards. Not many good signs there.

A source told the website that she "might hit up the Grammys because she got an invite from a friend who works in production. She wants to go and will probably just go." Apparently, Brown and Rihanna's presence wont faze her too much. "She knows Chris will be there and so will Rihanna, but she's doesn't care about all that drama - she just wants to go to enjoy the festivities, the crowd and the music that the Grammys bring," the source added.

Having said that Karreuche has "nothing but love" for Brown, and potentially turning up to an award ceremony where he's nominated, it begs the question: Is she over him? Our guess is probably not, given that he ditched her for one of the world's most famous women. Although she's been seen with other suitors, there are plenty of signs that point towards her still being hung up on Brown.

Brown is nominated for Best Urban Contemporary Album at the 55th Grammys, the ceremony for which is tonight. Chris Brown will be performing at the Grammys