The First Official Trailer For Captain America: Civil War Caused A Frenzy Among Fans When It Was Exclusively Screened At The Disney D23 Expo On Saturday (15aug15). 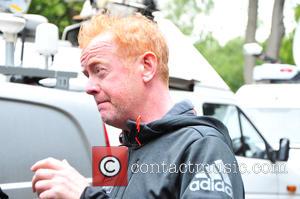 Two of the film's all-star cast, Chris Evans and Anthony Mackie, joined Marvel Studios president Kevin Feige onstage at the event in Anaheim, California, to reveal plot details and footage from the film, due for release in May, 2016.

Both actors, who are still shooting final scenes for the movie, flew in from Germany for the event, and Evans told the crowd, "I'm so happy to be here. I'm a big, big, big Disney fan."

Feige introduced the four-minute trailer, and editors at the Hollywood Reporter revealed the crowd went "full-on Hulk". Evans said after the teaser, "It's so good. I love it."

MACkie later tweeted, "Want to thank everyone who was there today.#D23Expo. We are lucky to do what we love and enjoy sharing it with you!"

Robert Downey, Jr. will reprise his role as Tony Stark/Iron Man in the movie, alongside Scarlett Johansson, Elizabeth Olsen, and Paul Rudd.