Chris Hemsworth loves having his own Thor action figure and has revealed his own niece has a doll of him she plays with. 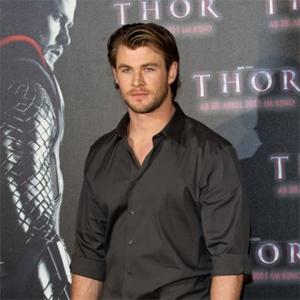 Chris Hemsworth's niece has a toy doll of him as Thor.

The Australian star plays the titular superhero in the new Marvel movie of the same name and his elder brother Luke's daughter has been driving her dad - who is also an actor and has appeared in the soap 'Neighbours' - mad by making the plastic action figure talk all the time.

He revealed: "I was talking with my older brother the other day and his daughter was running around the house with a Thor action figure; he wanted to pull the batteries out of it because she keeps pressing the button and making it speak, 'I am Thor!' or, 'The mighty Mjolnir!' It does nothing but make me laugh, it's great."

As well having his own action figure, Chris - who also has a younger sibling, Liam, 21, who starred opposite Miley Cyrus in 'The Last Song' - got to kiss his beautiful co-star Natalie Portman in the film.

But the 27-year-old screen hunk insists it wasn't that enjoyable because there were 50 people on set watching them lock lips.

He told website moviefone.com: "It's all rather intimidating and fairly unromantic; you've got 50 people around you and cameras on. It ends up being quite humorous more than anything. You feel like little kids; you've just got to have a laugh and get on with it."