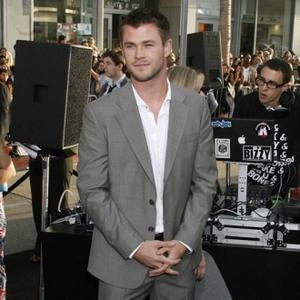 Chris Hemsworth thinks 'Thor' has a "real sense of humour".

The Australian actress - who plays the titular God in the forthcoming action adventure movie - thinks many will be surprised at the funny-side the film has.

He said: "The stuff you see in the trailers with Natalie Portman, there's a real sense of humour to it, which I don't think we expected at the time.

"Thor is a real fish-out-of-water and I'd actually just come from shooting the stuff in the other realm or world that we were in, with Anthony Hopkins and big elaborate set pieces and costumes, and he's fantastic and it was all wonderful and then come to do the Earth stuff with Natalie Portman, Kat Dennings and Stellan Skarsgard, and Jane's in a t-shirt."

Chris recently revealed he was too keen with the workouts for the muscular character and ended up breaking his costumes because of the size he became.

He said: ""The filmmakers kept saying 'Yeah, get as big as you can, as big as you can.' And then I came back right before Christmas, just before we started the movie, and had a final sort of camera test and put the costume on and within a couple of minutes, my hands started going numb.

"And everyone was like, 'Yeah, that's not cool.' And I started getting pins and needles and you'd touch the skin and the blood wouldn't return to that area so quick. And I thought, 'OK, it doesn't fit.' "