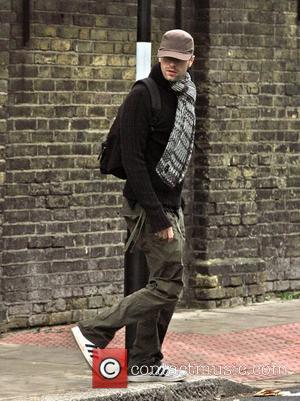 Picture: Chris Martin goes for a walk near his home. Chris did his best to give photographers the Cold shoulder by shielding his face with his...

Chris Martin has walked out of an interview with BBC Radio 4 in discomfort at being questioned about Coldplay's new album.

The frontman was being interviewed for the station's art programme Front Row when he asked to leave the studio after nine minutes of discussion.

Will Champion, the four-piece's drummer, was left alone in the studio to answer the questions of interviewer John Wilson until his bandmate returned to stammer an answer to the final question.

The band's fourth album Viva La Vida or Death And All His Friends was released on Thursday June 12th and is expected to shatter sales records for the year, with HMV estimating more than 250,000 copies will be sold in its first three days on release.

However, Martin appeared uncomfortable with being interviewed about the album and its lyrical content.

"I wouldn't agree with you there at all, no," said Martin after Wilson questioned whether the album's title reflected an obsession with death.

"I'd say you're journalistically twisting me into saying something I don't really mean," he added.

And when Wilson asked if the band started with the song Viva La Vida and "the idea within that song of the deposed dictator looking back at his life", Martin replied: "I'm not enjoying this. Can I have two minutes?"

When asked if he was feeling the pressure, he explained: "I just don't like talking about things."

Judging by the album's sale figures, Martin can afford to let his music do the talking after it sold more than 100,000 copies on its first day on release.

According to HMV, the speed with which Viva La Vida is flying off the shelves means it has the potential to become the second fastest-selling album in UK chart history behind Oasis' 'Be Here Now', which sold 695,761 copies in its first week when it came out in August 1997.

"This rate of sales exceeds even our optimistic forecasts, and shows how massively popular a band Coldplay remain despite having been away for the best part of three years," said HMV spokesman Gennaro Castaldo.

"Aside from having a substantial core fanbase, Coldplay are one of the few acts that can genuinely connect with a much wider audience."