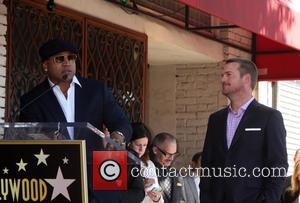 Chris O'Donnell gave a nod to his heritage by unveiling his star on the Hollywood Walk of Fame outside an Irish pub in Los Angeles on Thursday (05Mar15).

The Batman & Robin actor was honoured with the 2,544th star on the famous sidewalk and he was joined by members of his family, including his mother and six siblings, who flew in from all over the U.S. to celebrate his special day.

O'Donnell, whose wife and five children also turned out for the ceremony, choked back tears as he unveiled the monument and thanked his loved ones for making such huge efforts to get there, saying, "This is indescribable to say the least... I have got a lot of family, I may have set the record for family here today and they came from all across the country, usually it's a funeral or something depressing so it's lovely to have something to celebrate."

O'Donnell's star was given an extra special family touch as it was installed outside Jameson's Irish Pub on Hollywood Blvd as a nod to his Celtic roots.

He was also joined at the unveiling ceremony by his NCIS: Los Angeles co-stars LL Cool J and Daniela Ruah.