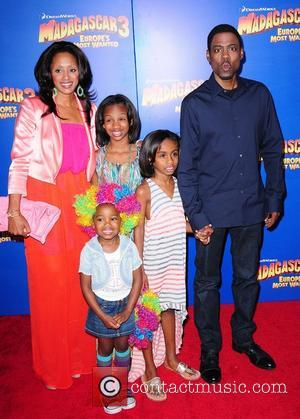 Chris Rock made a dig at R&B singer Chris Brown on Thursday morning's Today show (June 7, 2012), joining in with the critical voices with something to say about Brown's recent duet with his ex-girlfriend Rihanna (Brown was charged with assaulting her in 2010). The comedian cracked the joke as the show came back from a commercial break and host Matt Lauer said to the viewers "We're hoping the same kind of weather hits us tomorrow when we've got Chris Brown out on the plaza."
In a beat, Rock had jumped in on Lauer's intro and said "Did you say you hope the same weather hits you?" he said, smiling, adding, "I hope some weather doesn't smack us upside the head." During his appearance on the show, Rock also made a joke about President Barack Obama, which appeared to make the show's host Ann Curry feel a little uncomfortable. When he was asked what kind of animal he would like to be, given a chance, he opted for the zebra, and added "in honor of our zebra president, black and white, white and black. I love our president but he's black and white, he appeals to all." Clearly unsure of what to say, Curry was quick to move on with the questioning.
Rock was on the show to promote his latest movie release, Madagascar 3: Europe's Most Wanted. His song in the movie has received over 750,000 plays on Youtube so far, though he joked that he wasn't going to get rich any time soon unless YouTube start paying royalties.