Rocker Chrissie Hynde Has Come Under Fire After For Her Controversial Stance On Rape, Suggesting Women Who Dress Provocatively Are To Blame If They Are Attacked. 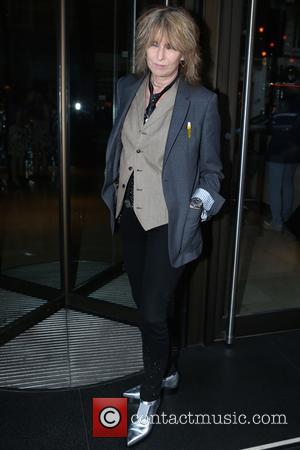 Hynde shared her opinions on rape in a British tabloid article after revealing she was forced to perform sex acts on a motorcycle gang member in Ohio when she was 21, and she takes "full responsibility" for what happened.

Now, The Pretenders star insists women should dress modestly and keep to themselves to avoid being sexually assaulted, and her comments, made to a British tabloid, have prompted a storm of protest.

Hynde says her attacker promised to take her to a party, but took her to an empty house instead, and threatened her with violence.

She recalls, "Technically speaking, however you want to look at it, this was all my doing and I take full responsibility. You can't f**k about with people, especially people who wear 'I Heart Rape' and 'On Your Knees' badges... Those motorcycle gangs, that's what they do. You can't paint yourself into a corner and then say, 'Whose brush is this?' You have to take responsibility. I mean, I was naive... If you play with fire you get burnt. It's not any secret, is it?"

The singer tells the Sunday Times Magazine women need to avoid wearing high heels, so that they can run from any potential attacker, adding that those who dress provocatively are "enticing" men to attack them. She adds, "If I'm walking around in my underwear and I'm drunk, who else's fault can it be? If I'm walking around and I'm very modestly dressed and I'm keeping to myself and someone attacks me, then I'd say that's his fault.

"But, if I'm being very lairy and putting it about and being provocative, then you are enticing someone who's already unhinged - don't do that. Come on! That's just common sense. You know, if you don't want to entice a rapist, don't wear high heels so you can't run from him. If you're wearing something that says 'Come and f**k me', you'd better be good on your feet... I don't think I'm saying anything controversial, am I?"

Lucy Hastings, director of the charity Victim Support, was appalled by Hynde's comments, insisting celebrities should be encouraging women to come forward to report violent sexual crimes, not suggesting rape is their own fault.

She says, "Victims of sexual violence should never feel or be made to feel that they were responsible for the appalling crime they suffered - regardless of circumstances or factors which may have made them particularly vulnerable.

"They should not blame themselves or be blamed for failing to prevent an attack. Often they will have been targeted by predatory offenders who are responsible for their actions.

"It is critical that nothing deters victims of sexual violence from coming forward to the police or to independent organisations so they can get the help and support they need."