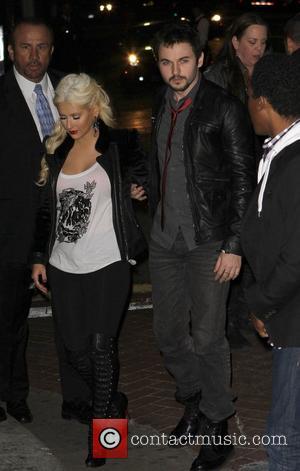 Christina Aguilera was the hot topic of conversation at Sunday evening's American Music Awards, but for all the wrong reasons. The 'Beautiful' singer performed 'Moves Like Jagger' with Adam Levine, but was slammed for her choice of dress and again became the subject of swirling pregnancy rumors.
According to Fox News, the singer's "atrocious ensemble" sparked fresh baby rumors, with Aguilera appearing to have "a potato sack" in her mid-area. The 30-year-old performed in a tight white dress, which fans and critics were less than enamoured with on Twitter. It's the latest fashion backlash against Christina, who was slammed by Kelly Osbourne on E!'s Fashion Police show in August, saying, "Maybe she is just becoming the fat bitch she was born to be.I don't know. She was a c**t to me. She called me fat for so many f***ing years. So you know what? F**k you! You're fat too". The singer, who maintained a slim figure during the early part of her career, has since experienced fluctuating weight and is often criticised for her sartorial choices. Earlier this month, Aguilera took to the stage at the Michael Jackson tribute concert in Wales but was slammed for her outfit, with Fox saying, "her voluptuous figure was barely contained in her tight fishnet stocking and corset".
The singer's representatives have constantly played down speculation she is expecting her second child.